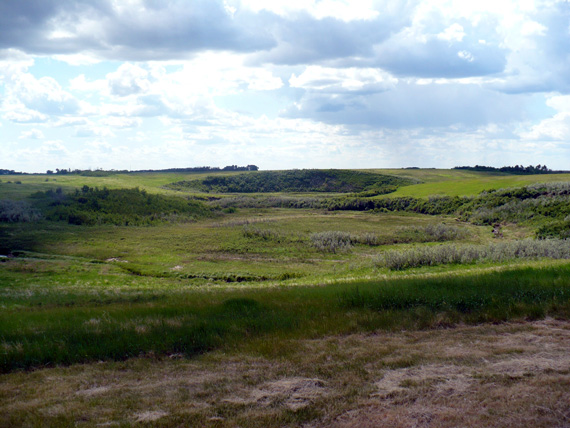 Battle of Touronds Coulee/Fish Creek is of national historic significance because:

In the 1880s, people of western Canada, particularly Métis and some First Nations, were alarmed by the Dominion of Canada’s plan, as part of Canada’s National Policy, to survey lands of the Canadian west with a new grid land system to accommodate immigration and new settlement. With their concerns not being recognized by the federal government and tensions mounting, the Métis, led by Louis Riel and Gabriel Dumont, declared a provisional government at Batoche to have a voice and formally negotiate with the Canadian government. The provisional government declaration was seen as a revolt by the Canadian government that would be addressed through confrontation. The Métis provisional government, increasingly frustrated by the lack of response to negotiate from Ottawa, began to prepare and arm for the protection of their lands. The Métis encounter with and defeat of North West Mounted Police at Duck Lake on March 26, 1885, convinced the Canadian government that the police force was inadequate to quell the insurgency. The North West Field Force, made up of Canadian militia from eastern Canada and Manitoba and led by General Frederick Middleton, was thus created and dispatched forth to Batoche in the North West Territories – the heart of the Métis homeland.

“… Dumont now planned to ambush Middleton and his men by day, and his knowledge of the terrain suggested to him as the obvious place Tourond’s Coulée, the ravine that twisted from Tourond’s farm towards the South Saskatchewan, and down which Fish Creek ran to the main river. Into the coulee and up again on to the parkland south of Batoche, wound the most direct trail from Clarke’s Crossing to Gabriel’s Ferry, the trail which – as Jérome Henry informed Dumont – Middleton and his column intended to take. It was the kind of natural trap in which, if everything went well, a small army might be closed off and systematically potted until the survivors gave in. Marksmen carefully placed in the creekbed and on the slopes above could command the road all through the ravine, and, at the bridge which Middleton’s men must cross, low thick woods came close down to the edge of the creek. There was perfect cover for the ambusher, and perfect exposure for the ambushed; it was a miniature Khyber Pass of the North, and after the battle was over General Middleton, whose past experience included the Indian Mutiny, would admit that, if it had not been for the excellence of his own scouts, his column might easily have been destroyed.” (from George Woodcock, Gabriel Dumont 1975, page 196)