The false mermaid is an endangered plant species in Quebec. Its population on Grosse Île is one of the most northern of the province. Over the last 12 years, the mermaids appear to have been affected by various factors and have experienced a drastic decline.

The inventory carried out in 2008 demonstrates that its population consists of about a thousand individuals only, compared to 5000 in 1996. Measures have been recommended to protect this species, including the installation of exclosures to avoid the plant being trampled and grazed by white-tailed deer. 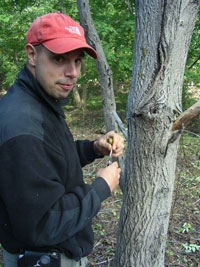 This study evaluated the population of the butternut on Grosse Île at more than 89 individuals in 2005. Taking into consideration a number of unregistered individuals, the total population of butternut could be as high as 125. Their average diameter is between 21 and 30cm.

Among the stress factors affecting the butternut on Grosse Île are butternut canker (40.4%), fungus and diseases (4.5%) as well as scratching by white-tailed deer (4.5%).

Taking into consideration its geographical isolation, the possible presence of butternut canker and competition from other nearby species, the small population of butternut on Grosse Île is in a precarious position and could disappear.

Management plan for plants of interest

The floral biodiversity of Grosse Île is of particular importance: 600 species exist, several of which are rare plants. Several communities of vegetation make up the flora of the island.

A management plan for plants of interest was developed to preserve and protect Grosse Île. More than 140 species were classified and ranked by priority. Management measures have been developed for each of these identified plants. 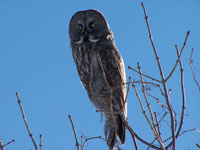 An inventory of wildlife resources was carried out on Grosse Île during the summer of 1992. The island was divided into two sectors: the wooded and populated areas. Inventories were conducted along the trails crossing the island. Every bird observed was recorded, while birds observed outside of the census were also noted. Small mammals were sampled using 100 Sherman and Victor type traps. The research allowed us to characterize amphibians and reptiles.

Two small species of mammals are found in all habitats of the island, the deer mouse and the meadow vole. Several other types of mammals were also observed.

Two species of reptiles, the garter and ringneck snakes, and six species of amphibians, the green frog and the wood frog were surveyed. Further investigations will be required to characterize all of the wildlife resources on the island.