A Citadel against the city's horizon 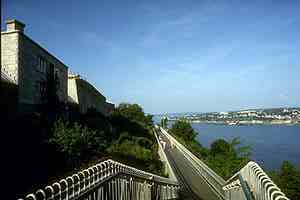 
Mann's last element in his defence plan was carried out between 1819 and 1832: Elias Walker Durnford engineered the building of Québec's Citadel on Cape Diamond. The structure consisted of an irregular pentagon with two sides located on the edge of the cliff, one near the country on the west and two facing Upper Town. Ravelins located in front of the curtain walls reinforced the two fronts on the city's side. Casemates were also built under the rampart on this side. The western front was safeguarded by a ravelin and two counterguards. 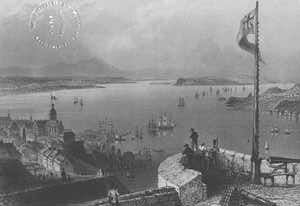 Durnford therefore integrated a section of the 1745 enceinte with the Citadel. The only real new fronts were those that faced the city. This meant that the Citadel was to be the final refuge for the British garrison in case of a siege or citizen uprising. It is important to mention that the Citadel was built during a time when military authorities distrusted the conquered population and when political unrest was rampant.

But why build a conventional structure in Québec? In Europe, engineers were building innovative strongholds known as detached forts. One reason appears to be the most likely; the rebellion of 1837 in Lower Canada justified the engineers' choice for erecting a classic citadel. Once the prison was built in the King's Bastion in 1842, no pretext was needed to integrate the necessary parts with the layout of the second "ultimate réduit," which was located inside the Citadel.