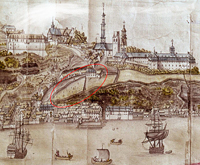 Excerpted of an Engraving from Jean-Baptiste Franquelin
© BANQ

The Episcopal Palace after the 1759 shelling
© MNBAQ

The Parliament circa 1852
© Québec City Archives

The Parliament circa 1860
© Illustrated London News

Located at the top of Côte de la Montagne in the historic district of Old Québec, Montmorency Park has been a cemetery, a seat of religious and civil power, a strategic military site and an urban park. Nonetheless, its function as the meeting place of the Legislature of the United Province of Canada between 1841 and 1866 was what led the Historic Sites and Monuments Board of Canada to designate it as a site of national historic significance in 1949.

Occupied by the Recollet Fathers in 1616, the land saw a succession of owners until it was acquired in 1688 by Monseigneur de Saint-Vallier, who used the house as the site of the first Episcopal Palace. Between 1693 and 1695, Saint-Vallier began building a new palace but the project was ambitious and only half of the building was completed. Partially destroyed during the siege of Québec in 1759, the building was not renovated until 1766.

In 1791, the British Parliament adopted the Constitutional Act, which divided the colony into Upper and Lower Canada. Institutions were then set up for each province, including a governor, an executive council appointed by the Crown and a legislative council. In Québec, Governor Carleton and the legislative councillors sat in the Episcopal Palace. It was also in this building that, on December 17, 1792, the first session of the Legislative Assembly of Lower Canada opened.

The turbulent period that followed the Constitutional Act culminated in the rebellions of 1837 and 1838. As a result, the British Parliament adopted the Union Act, which unified Upper and Lower Canada into a single province, United Canada. During this period, Parliament moved between the cities of Kingston, Montréal, Toronto and Québec. Québec served as the seat of power of United Canada from 1852 to 1855 and from 1860 to 1865. In October 1864, a meeting that was pivotal in shaping Canada’s political history was held there.

Between 1864 and 1867, three conferences were held in Charlottetown, Québec and London. Based on the work carried out during the Québec Conference, the delegates prepared a series of recommendations: the Québec Resolutions. These 72 resolutions were the basis for work that would result in royal assent being given to the British North America Act, which would enter into force three months later, on July 1, 1867.

With Confederation, the city of Québec became the capital of the province of Quebec. The new provincial government sat in the former Parliament of United Canada. In 1883, the building was destroyed by fire. The elected representatives then moved into the current and much larger parliament building. At the time, construction of the main wing had barely begun.

A decade later, the site was cleaned out and turned over to the city. At the initiative of Mayor Simon-Napoléon Parent, it became a public park in 1898. In 1908, it was named “Montmorency Gardens” in memory of the viceroy of New France, Henri II, Duke of Montmorency, and the first bishop of Québec, Monseigneur François de Montmorency-Laval. In 1950, the federal government (Parks Canada) took ownership. Today, Montmorency Park remains one of the walled city’s few public parks. It is an integral part of Fortifications of Québec National Historic Site.