In 1999, the Historic Sites and Monuments Board of Canada recognized the Québec Garrison Club as a site of national historic significance for the following four reasons. Founded in 1879 by Canadian militia officers, the site is the only military club in Canada perpetuating the British colonial tradition of social gatherings between military officers and influential members of civilian society. This place also reflects a strong and enduring symbolic value dear to Canadians who have attained an elevated social and economic position. In addition, the site contributes to the heritage character of Old Québec not only as a social phenomenon, but through its buildings and landscaped grounds as well. Lastly, the Québec Garrison Club is of special significance because it is part of the Fortifications of Québec.

Located at 97 Saint-Louis Street in the historic district of Old Québec, the Québec Garrison Club has been owned by Parks Canada since 1992. The site includes the Garrison Club building per se at the corner of Côte de la Citadelle, as well as the messenger house built in the courtyard, the well house, a shed, a garden, wooded grounds and parking areas. It also features numerous archaeological vestiges of the engineers’ courtyard dating back to the late 18th century and the first half of the 19th century, many of which were discovered during excavations in 1992 and 1993. Lastly, an ethnological collection is also among the key components of the Québec Garrison Club. 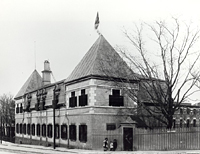 The Québec Garrison Club before 1921

Of the private clubs of British tradition that have formed since the 18th century, the Garrison Club is the oldest still in existence. In 1891, the military founders opened the club to Québec’s political and economic elite, making it an exclusive venue for meetings and exchanges. At the time, the club offered its members a room for playing cards and dominos, a billiards room, a library, a reading room, a smoking room, a dining room and a few bedrooms. Until 1918, the Club was for men only. Women did not become full-fledged members until 1984, when the Garrison Club merged with the Cercle universitaire de Québec, creating a new corporation. The French name, originally “Club de la Garnison”, was changed to “Cercle de la Garnison.”

The Garrison Club has always provided its members with a very high level of excellence in its many services. This level of excellence is also reflected in the quality of guests received by the club throughout its history. Charles Lindbergh, Winston Churchill, Marshall Foch and the Prince of Wales are just a few examples. Many business people and political figures still come here to network, knowing that the Québec Garrison Club offers them a strictly private and confidential meeting place. While the Club is open only to members and their guests, the public can learn about its history from the commemorative plaque at the site.