Discover the goals, the actions, the results and the discoveries made during three campaigns of the fort Sainte-Thérèse archeological digs.

The history of Fort Sainte-Thérèse over the years.

To permit the French army offensive against the Iroquois nations and to put an end to their attacks, a series of forts was built in 1665 and 1666 at the most strategic spots along the Richelieu River. This set the context for the building of Fort Sainte-Thérèse. However, once a peace treaty was signed, Fort Sainte-Thérèse was abandoned. It would be rebuilt during the Austrian War of Succession in 1747.

For a long time, the fort’s exact location remained unknown, until it was discovered in 2007 on an aerial photograph dating back to 1938. Archaeological digs conducted in 2008 and 2009 confirmed the precise spot where the fort had stood.

“The goal of the 2010 digs was to understand how the fort evolved between the 17th and 18th centuries,” said Parks Canada archaeologist Maggy Bernier. “We also sought to learn more about the arrangement of the three 17th and 18th century buildings within the fort’s walls.”


The Parks Canada archaeologists in charge of the dig team, Maggy Bernier and supervisor Pierre Cloutier, are pleased to announce that the digs have produced some fine discoveries. “Analysis of the results will help in gaining a better understanding of the place this fort occupied in the Richelieu Valley defence system under French rule as well as its role in the supply network for Fort Saint-Frédéric and Fort Carillon on the shores of Lake Champlain,” Mr. Cloutier added. 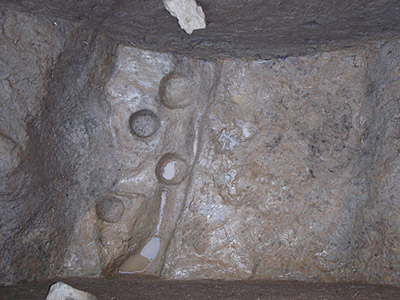 Footprints of five piles located within the
limits of the trench