History : Along the water

The Ottawa River is one of the main tributaries of the St. Lawrence. Its source lies north of Ottawa in the vast Lake Capimitchigama. The upper reaches of the Ottawa River are linked to Lake Huron by the Matawan River, Lake Nipissing and French River. However, many rapids lie along the section of the Ottawa River between Montreal and Ottawa, the largest being Long Sault.

Overcoming these rapids using locks began only in the early 19th century, although a first attempt to bypass them dated back to the 1600s: this consisted of three portage trails on the river's north shore.

Anyone travelling to the Great Lakes or even to the Laurentians just north of Montreal had to face these natural obstacles. Trade, and above all, military requirements would soon bring about a better way for boats to bypass these hurdles.

The earliest canals were simple trenches created by removing huge rounded rocks, which were very common on the north shore of the Ottawa River.

These simple canals or rock channels were small and had no locks. There was also the Pointe-Fortune Canal, built in 1818 opposite Carillon on the south shore of the river. This had only one lock. But the need to exploit forestry resources combined with the need for a communication route between the provinces of Upper and Lower Canada would result in another navigation system. The American invasion attempt along the St. Lawrence during the war of 1812 obliged the government to order an effective canal system to be built on the Ottawa River. Constant attacks along the St. Lawrence showed that communication lines between Kingston and Montreal, the two main military positions of Upper and Lower Canada, could easily be severed. The Ottawa River Canal and the Rideau Canal were thus designed to offer an alternative route in the event of war with the Americans.

The first canal system was built between 1819 and 1833 by the Engineers of the British army. It consisted of the Grenville Canal, the Chute-à-Blondeau Canal and the Carillon Canal. Altogether there were 11 locks and the draught was under 2 m. 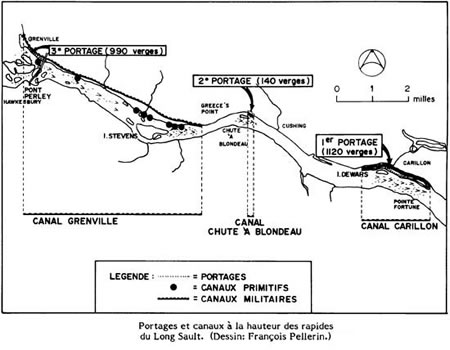 Map of portage paths and of the first canal system on the Ottawa River circa 1834, François Pellerin / circa 1982

Although the canal built on the Ottawa River was originally intended purely for military purposes, forestry was to become main economic activity in this region. From 1867, local business people demanded that the government carry out improvements to the network because the original system had become outdated.

In 1870, the Canals Commission recommended making the Ottawa River deeper between Lachine and Ottawa. Between 1873 and 1882, a second canal system was therefore built, consisting of two canals: Grenville and Carillon. The construction of a dam upstream from the village of Carillon raised the level of the Ottawa River enough to render the Chute-à-Blondeau lock useless.

With the decline in the timber trade, the Ottawa River would be used in the last quarter of the 19th century for the transport of pulpwood, lumber and firewood. Barges loaded with these products would travel down the Ottawa River in large numbers to the American market via the Chambly Canal.

However, the competition of the railways, which offered a faster, more direct means of communication, along with the increase of pleasure boating, eventually resulted in the Ottawa River canals changing from commercial waterways into tourist attractions.

Between 1959 and 1963, Hydro-Quebec erected a major dam at Carillon. Part of the second Carillon Canal was buried during construction of the present-day lock, which negotiates a drop of nearly 20-m and performs the same function as the 11 locks of the original canal system.

Today, the Carillon Canal is a prominent heritage site and recreation area, visited annually by 11 000 pleasure boaters and 12 000 people who use its banks.

Close to the original Carillon Canal are various elements of historical interest: the remains of lock No. 1, built between 1830 and 1833, the original canal, the superintendent's and toll collector's houses, the jetty of the second canal built between 1873 and 1882, and the Carillon Barracks, today the Regional Argenteuil Museum.