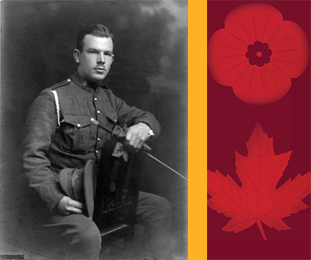 During the First World War, Henry Norman Bethune served in all three divisions of the Canadian armed forces. He first enlisted in the Royal Canadian Army Medical Corps in 1914 and served as a stretcher bearer until injured in the Second Battle of Ypres in Belgium. His exposure to the bloody reality of war deeply affected him and he returned to Canada to complete his medical degree. In 1917, Dr. Bethune re-enlisted with the Royal Canadian Navy as a ship’s doctor and was later appointed as the first medical officer of the new Canadian Air Force, established at the end of the war.

Dr. Bethune’s dedication to saving lives would lead him to many more battlefronts including in China where he succumbed to an infection on the frontline while performing surgery.

To Canadians, Chinese and Spanish, Dr. Bethune embodies Canadian sacrifice. He is a Canadian military hero and social activist whose significant contributions are not to be forgotten.

* The Poppy Design is a registered trademark of The Royal Canadian Legion, Dominion Command and is used under licence.