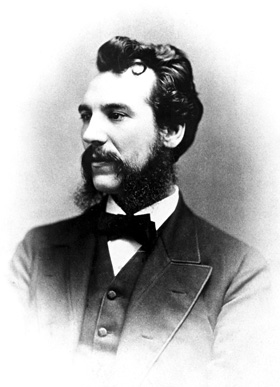 Best known as the inventor of the telephone, Alexander Graham Bell (1847-1922) was also a pioneer in the field of deaf education. Bell first came to Baddeck in 1885 and returned the next year to establish a vacation home for his family, far from the formality and summer heat of Washington, DC. He regularly spent a substantial part of the year at Beinn Bhreagh and both he and his wife, Mabel Hubbard Bell, played an active role in the social and intellectual life of the village.

By the time of Bell's arrival in Baddeck, the success of the telephone had freed him from the need to earn a living and, at Beinn Bhreagh, Bell continued his busy routine of experimentation and analysis. His imagination and wide-ranging curiosity led him into scientific experiments in such areas as sound transmission, medicine, aeronautics, marine engineering and space-frame construction. Bell can be considered an inventor, an innovator, an inspirer of others and a humanitarian. Aeronautical work was a large part of his life at Beinn Bhreagh, from early kite-flying experiments to the success of the Silver Dart in February 1909. This achievement was a product of Bell's collaboration with four young men (Casey Baldwin, Douglas McCurdy, Lieutenant Thomas Selfridge and Glenn Curtiss) in the Aerial Experiment Association, founded in 1907. In later years, Bell and Baldwin turned to experiments with hydrofoil craft that culminated in the development of the HD-4, which set a world speed record in 1919.

Bell's activities at Beinn Bhreagh had a significant impact on the economic and social life of Baddeck. The estate provided work for men and women both in traditional service occupations and in jobs connected with Bell's experiments, such as production of thousands of tetrahedral cells for his massive kites. Mabel Bell played a vital role in her husband's career, providing him with both financial and moral support to pursue his diverse interests. It was Mabel Bell who inspired, founded and funded the Aerial Experiment Association which achieved heavier-than-air flight. Mabel Bell was primarily responsible for the management of Beinn Bhreagh and was deeply involved in village life, helping to establish the local public library, and the Home and School Association as well as a club for young women to promote sociability and the acquisition of general knowledge.

The major historical resources at the site are the large collection of artifacts related to Alexander Graham Bell's research, which he conducted both at Baddeck and elsewhere; books, photographs and copies of material from his personal archives; and various personal items, furniture and awards received by Bell during his lifetime. Most artifacts are original, but there are some reproductions that are also valuable, particularly ones such as the HD-4 reconstruction, which incorporate original parts. Some archival materials are original, others are valuable copies of original transcriptions located elsewhere.

Still in private ownership, Bell's summer estate retains many elements such as roads, wharfs and buildings from his time. His descendants maintain Beinn Bhreagh Hall and many of the historic outbuildings (e.g. the Kite House, the Lodge, and the Kia Ora boathouse), although some are considerably changed. The graves of Alexander Graham Bell and his wife Mabel are located on the Beinn Bhreagh estate. There is no public access to this property. It is a significant off-site resource because, as the scene of Bell's work, it provides the context for the exhibit complex.