During the First World War, the young men of the Newfoundland Regiment, while awaiting transport to England, were stationed in Pleasantville, only a short distance away from Signal Hill. It was here that they slept, trained, and prepared to be sent to war and fulfil their duty to King and Country. For those young men, many just teenagers, it was an incredible sacrifice. They spent their days in grueling training exercises and drills – a process of hardening that aimed to prepare the men for the combat and conflict that awaited them overseas. These men were forced to leave the carefree days of their youth behind.

However, there was one exception in these difficult days of preparation for war. The Newfoundland Regiment Hockey team was a source of joy, camaraderie, and pride. It was a time when the spirit of youth could return and these soldiers could be boys again. 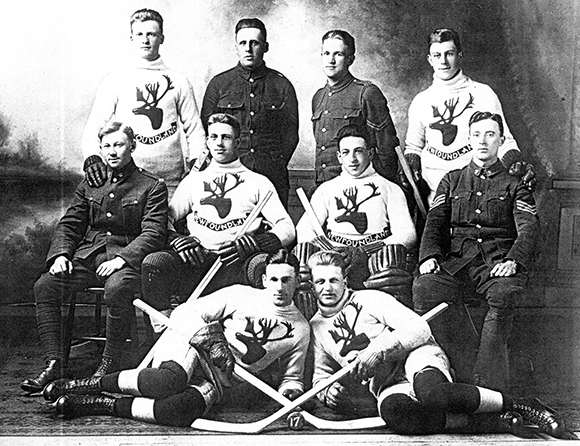 Canada and Newfoundland were both rivals both in the sphere of the North Atlantic fishery and their perceived position inside the British Empire. In the early 20th century, their shared and separate roads into the modern era were immeasurably shaped by their participation and sacrifice in the Great War and intertwined in their shared love of hockey. The intersection of Canada and Newfoundland's love of the game at this moment in history stands as a commonality and perhaps a small sign post on the road to Confederation.

During the Great War, both the Regiments comprising the Canadian Expeditionary Force (CEF) and the Royal Newfoundland Regiment (RNR) fielded ice hockey teams. From historical record, there are a number of occasions where the teams from these two countries met on the ice in exhibition during the war. For example, in 1917, the Newfoundland Regiment Hockey team played against the CEF and Canadian amateur teams in Halifiax and Windsor, Nova Scotia, during a 10-week wait for convoy transport to England. These public matches served as a living poster of one of the positive aspects in the armed services to aid in recruitment. Where little common ground could be found between the two countries at the time, the one thing that brought them together was their shared love of the game -of hockey.

Parks Canada is proud to share the story of the Newfoundland Regiment Hockey team at Signal Hill National Historic Site.