In fiscal 2012-13, frozen allotments will be established by Treasury Board authority in departmental votes to prohibit the spending of funds already identified as savings measures in Budget 2012. In future years, the changes to departmental authorities will be implemented through the Annual Reference Level Update, as approved by Treasury Board, and reflected in the subsequent Main Estimates tabled in Parliament.

As part of the performance reporting process, the Parks Canada Agency prepares financial statements on a full accrual basis in accordance with Treasury Board accounting policies, which are based on Canadian Generally Accepted Accounting Principles (GAAP) for the public sector. However, the spending authorities voted by Parliament remain on an expenditure basis.

This section highlights the significant items that contributed to the net increase in resources available for the year and net decrease in actual expenditures for the quarter ended December 31. 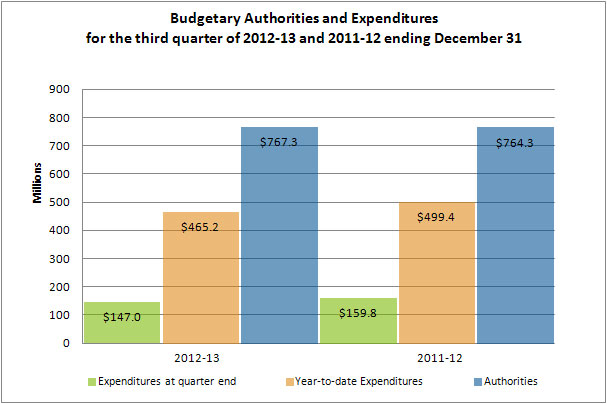 The above chart outlines the total authorities available within the Agency as of December 31 of each year, the year to date expenditures as well as the expenditures during the quarter.

As of December 31, 2012, total authorities available for the year are $3 million higher compared to the same quarter of the previous year.

The differences are primarily attributable to the following:

Planned:
As per the Budgetary Expenditures by Standard Object Table, the total planned expenditures as of the third quarter ending December 31, 2012, increased by $3 million compared to the previous year, from $764.3 million to $767.3 million. This represents less than a 1-percent increase in planned expenditures compared to the same period in 2011-12. The increase in planned personnel expenditures is mostly attributable to the adjustment made to the Agency's reference levels for personnel in order to reflect historical spending patterns as well as funding received for increased costs incurred in severance resulting from the reduction of its workforce. The majority of the increase to the transfer payment standard object is related to the renewal of the Agency's General Class Contribution Program. The other subsidies and payments standard object has also increased as the Agency is planning on investing in the establishment and expansion of national parks and marine conservation areas.

The decreases in standard object planned expenditures for transportation and communication and professional and special services mostly relate to the transfer made to Shared Services Canada for e-mail, data centre and telecommunications services and the decrease in the Trans-Canada Highway funding as a result of nearing completion of the project.

Parks Canada Agency is primarily funded through voted parliamentary spending authorities appropriated over a two-year period for program expenditures, including capital expenditures and transfer payments. Also, Parks Canada is partially funded through respendable revenue which originates mainly from entrance and camping fees. These revenues are impacted by economic fluctuations, competition from other parks and cultural attractions and weather conditions. At the end of the third quarter, the Agency's operational revenues (also referred to as expenditures equivalent to the revenues in the Statement of Authorities Table were consistent with the prior year's collections.

The Agency is reviewing dams on canals to determine their status, short term remedial measures needed to reduce risks, and recapitalization requirements to ensure compliance with industry standards. As part of ongoing due diligence in operations and maintenance of the dams, the Agency plans to complete dam safety reviews for 39 high risk dams at a cost of approximately $15.6 million. This work began in 2011-12 and will be completed in 2015.

This section provides an overview of the savings measures announced in Budget 2012 of $6.0 million for 2012-13, $19.7 million for 2013-14 and $29.2 million for 2014-15 and ongoing through both reductions and restraint to streamline and focus operations while ensuring continued quality delivery to Canadians on its important mandate.

The following are the major elements being implemented:

On October 18, 2012, the government announced the navigation season on canals for 2013 to provide a workable schedule going forward while minimizing the impact on the local economies and visitors.

Consistent with the Government of Canada's efforts to reduce the deficit, streamline government activities and ensure value to Canadians, Parks Canada has implemented national human resources strategies to build strong internal networks and focus on attracting, retaining and engaging its workforce. This is aimed at ensuring that Parks Canada's highly professional and dedicated workforce continues to provide quality services and programs to Canadians.

On November 15, 2011, along with 43 other departments and agencies, Parks Canada's Information Technology (IT) services in the domains of e-mail, data centres, network and telecommunications support were transferred to Shared Services Canada. This represents a reduction to the Agency's 2012-13 Authorities of $15.7 million.