This quarterly financial report reflects the results of the current fiscal period in relation to the Main Estimates (and Supplementary Estimates A as applicable) for which full supply was released on June 27th, 2011.

As part of the performance reporting process, the Parks Canada Agency prepares its annual audited financial statements on a full accrual basis in accordance with Treasury Board accounting policies, which are based on Canadian Generally Accepted Accounting Principles (GAAP) for the public sector. However, the spending authorities voted by Parliament remain on an expenditure basis.

This section highlights the significant items that contributed to the net decrease in resources available for the year and actual expenditures for the quarter ended September 30. 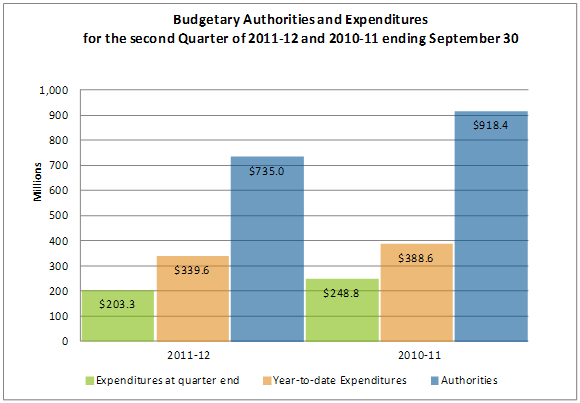 The above chart outlines the total authorities available within the Agency as of September 30 of each year, the year-to-date expenditures as well as the expenditures during the quarter.

As at September 30, 2011, total authorities available for the year are $183.4 million less than compared to the same quarter of the previous year.

The difference is primarily attributable to the end of funding under the Canada Economic Action Plan (CEAP). The major reductions are:

Expended:
As per the Budgetary Expenditures by Standard Object Table, the total expended in the second quarter ending September 30, 2011 decreased by $45.5 million compared to the previous year, from $248.8 million to $203.3 million. This represents an 18% decrease of expenditures recorded for the same period in 2010-11. The majority of the decrease between 2010-11 and 2011-12 relates to professional & special services, repair & maintenance, acquisition of land, buildings & works and is a result of the end of funding relating to the Canada Economic Action Plan for improvements and upgrades to national historic sites and Parks Canada's visitor facilities. All other expenditures are consistent with prior year spending trends.

Planned:
The decrease in planned expenditures for acquisition of land, buildings and works is also a result of the end of funding related to the Canada Economic Action Plan for improvements and upgrades to national historic sites and Parks Canada's visitor facilities.

Parks Canada is primarily funded through voted parliamentary spending authorities appropriated over a 2 year period for program expenditures, including capital expenditures and transfer payments. Also, Parks Canada Agency is partially funded through respendable revenue which originates mainly from entrance and camping fees. These revenues are impacted by economic fluctuations, competition from other parks and cultural attractions and weather conditions. At the end of Quarter 2, the Agency's operational revenues (also referred to as expenditures equivalent to the revenues in the Statement of Authorities Table) were $4.8 million higher than at the same time last fiscal year. This is a result of an increase in Business revenues and to improvements made to revenue recording processes.

The Federal Budget 2010 announced that the operating budgets of departments/agencies would be frozen at their 2010-11 levels for the fiscal years 2011-12 and 2012-13. Parks Canada has put in place the following measures to contain costs:

Budget 2011 announced that departmental budgets would be examined through a Strategic and Operating Review. Pursuant to this review, it is expected that future years' budgets will be reduced for fiscal years commencing in 2012-13. However, at this time, the nature and extent of any reductions are not known.

Over the past months, there were an unprecedented number of severe weather events that buried portions of 26 national parks and national historic sites under piles of debris and destroyed or damaged numerous visitor and operational facilities as well as several highways. The magnitude of damage and emergency response work has been and continues to be overwhelming both in respect to costs and timing, as these remedial works must be undertaken at the same time as the visitor season at parks and sites. On September 22, 2011, the Agency was successful in accessing the Treasury Board Management Reserve, to address the most immediate needs.

Parks Canada is responsible for 233 dams and 110 locks that control water levels along its nine historic canals. The replacement value of this infrastructure is estimated at approximately $4 billion. A preliminary vulnerability assessment has recently been carried out and in collaboration with Public Works and Government Services Canada, detailed inspections are now being carried out to determine short-term remedial measures to reduce risks and capital repairs to ensure compliance with safety codes.

Although the Agency delivered on the majority of its Canada Economic Action Plan commitments in 2010-11, the program continues to have a significant impact on operations in 2011-12. The Agency announced a project list that exceeded its Canada Economic Action Plan funding to ensure that it could fully deliver this program commitment. As a result, it is the Agency's intention to continue to deliver on approximately $26 million of announced investments within its existing capital program.

In addition, the Agency continues to deliver on the twinning of the Trans-Canada Highway with an investment of $130 million over the next three years.