A summary description of the Parks Canada Agency's programs can be found in Part II of the Main Estimates and a detailed description in Part III – Report on Plans and Priorities.

This quarterly report has been prepared using an expenditure basis of accounting (modified cash accounting). The accompanying Statement of Authorities includes the Parks Canada Agency's spending authorities granted by Parliament and those used by the Agency consistent with the Main Estimates and Supplementary Estimates for the 2015-2016 fiscal year. This quarterly report has been prepared using a special purpose financial reporting framework designed to meet financial information needs with respect to the use of spending authorities.

When Parliament is dissolved for the purposes of a general election, section 30 of the Financial Administration Act authorizes the Governor General, under certain conditions, to issue a special warrant authorizing the Government to withdraw funds from the Consolidated Revenue Fund. A special warrant is deemed to be an appropriation for the fiscal year in which it is issued. 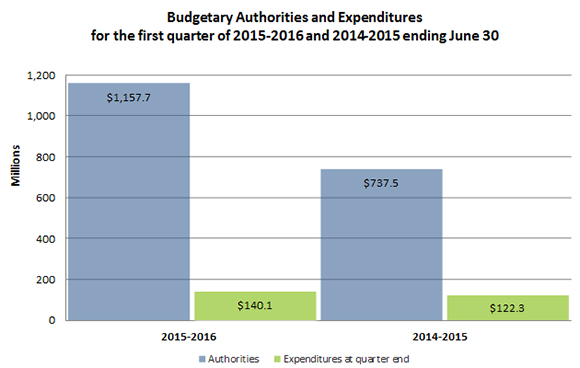 The above chart outlines the total authorities available within the Agency as of June 30 of each year as well as the expenditures during the first quarter. Significant changes to authorities and to expenditure patterns are outlined in the following sections.

Authorities available for use:
This quarterly report reflects the funding available for use from the 2015-2016 Main Estimates, the 2014-2015 unused spending authority and the 2015-2016 Supplementary Estimates A. The authorities at the same time last year consisted of the 2014-2015 Main Estimates and the 2013-2014 unused spending authority 1.

Authorities used during the quarter:
In the first quarter of 2015-2016, total net budgetary expenditures were $140.1 million compared to $122.3 million reported for the same period in 2014-2015, resulting in an increase of $17.8 million or 15-percent. The increase is mainly due to the new funding for Federal Infrastructure Investments as well as funding for improvements to highways, bridges and dams located in national parks and along historic canals (Economic Action Plan 2014). This is partially offset by the one-time transition accounting treatment of $10 million for implementing salary payment in arrears by the Government of Canada made in the first quarter of 2014-2015.

Planned by Standard Object
Total planned expenditures in the first quarter of 2015-2016 are $420.2 million higher compared to the previous year. This variance is due to the planned spending for both Acquisition of land buildings and works2 ($300.1 million) and to Personnel ($46.1 million). These increases are consistent with the Agency’s Infrastructure Investments Programs.

Expended by Standard Object
As per Table 2 (Budgetary Expenditures by Standard Object), the total expended in the first quarter ending June 30, 2015 is $17.8 million (15%) higher compared to the previous year. The overall variance can be explained by the following:

Transfer payments expenditures have increased by $2.9 million compared to the same quarter last year. This is mainly due to a new grant to the Quikiqtani Inuit Association to support the Inuit entrepreneurs as part of the establishment of the Qausuittuq National Park of Canada in Bathurst, Nunavut.

Other subsidies and payments have decreased by $13.5 million compared to the same quarter last year. This is mainly due to the one-time transition accounting treatment for implementing salary payment in arrears by the Government of Canada done in the first quarter of 2014-2015 and to a one-time expense related to the establishment of Nááts'ihch'oh National Park Reserve also paid in the first quarter of 2014-2015.

Parks Canada's objectives and Strategic Outcome are influenced by various internal and external factors. The Agency undertakes a risk assessment every year to support decision-making related to priority setting and resource allocation. The risk assessment identifies key risks that have the greatest impact on the Agency's ability to achieve its Strategic Outcome and expected results. The Agency has identified Asset Condition, Competitive Position, Natural Disasters and External Development Forces as its key corporate risks for 2015-20163. The following are examples of some of the mitigation strategies that Parks Canada is undertaking in order to address these risks:

Risks to the successful delivery of all infrastructure investments in the current fiscal year include: the ability to recruit employees on a timely basis to build capacity both within the Parks Canada Agency and Public Works and Government Services Canada; and industry capacity and interest to undertake the rehabilitation projects associated with increase in the Government's investment in infrastructure.

On July 3rd, 2015, the Prime Minister announced that Daniel Watson will be appointed Chief Executive Officer of the Parks Canada Agency, effective August 7, 2015.

In addition to these new investments, Parks Canada Agency's budget has also increased by $120.6 million for improvements to highways, bridges and dams located in national parks and along historic canals, as announced in Budget 2014.

To support the planning, reporting and project delivery of these new investments, the Agency has created two new organizations: Investment Planning and Reporting Directorate, and Asset Management and Project Delivery Branch.


1 The Parks Canada Agency operates on the basis of a two-year appropriation, whereby any surplus amount reported at the end of a fiscal year is carried forward and is available to be used the following year. However, any portion of the unspent funds not spent at the end of the two years is lost. This process differs from that of other government departments as they can only claim five percent of their operating vote and twenty percent of their capital vote through the carry forward process each year.
2 As per the Government wide chart of Accounts Acquisition of land buildings and works includes improvements involving additions or changes of a structural nature and reconstructions of physical assets.
3 The complete list of Corporate risks identified by Parks Canada Agency can be found in Part III – Report on Plans and Priorities.