What Do I Need to Know to Hike the Koroc-Palmer River Loop?

Hiking parties who are interested in tackling this hiking route will need to register (before their visit) with Torngat Mountains National Park (Parks Canada) as well as Parc national Kuururjuaq (Nunavik Parks) since the route passes through both parks. Visitors are also required to de-register after they have departed from either of these parks to ensure that staff know they have left the parks and have been accounted for.

This camp is situated in St. John’s Harbour in Saglek Bay. It presently operates from mid-July until early September. The base camp can provide support for visitor parties wanting to travel into Torngat Mountains National Park. Bear guards, Inuit guides, a helicopter, speed boats and longliners (fishing boats) are generally available for local charter. Arrangements can also be made for fixed wing access to the Saglek Airstrip (20V 519721 E 6482002 N) from Goose Bay, NL. Please contact the Nunatsiavut Group of Companies by phone (1-855-TORNGAT (867-6428) ext. 26) or email (basecamp@ngc-ng.ca) for inquiries about base camp. 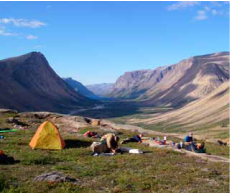 This challenging trek is a loop that starts and ends at the gravel airstrip in the Koroc River valley, which is located in the heart of the Torngat Mountains in the province of Quebec. Alternatively, you can start/finish this hike from Tallek Arm (Nachvak Fjord) and still complete it as a loop. This multi-day hiking route offers visitors the opportunity to follow several variations of the main suggested route to either shorten or lengthen their hike. There are also countless opportunities for side trips that can be done as day trips along the way.

Upon landing at the airstrip in the Koroc River valley, the remoteness and ruggedness of the land is evident. This wide valley stretches from east to west and is bound by smooth, rolling hills to the south and rugged sharp peaks to the north and particularly the northeast, where the highest summits in the Torngat Mountains are found. From the airstrip, the Koroc River is very wide and flows slowly to the west toward Ungava Bay.

Even if no wildlife is spotted in the area, their presence is felt through their tracks, which are found in the sand along the riverbank. This region is home to an abundance of wolf, black bear and caribou, as well as the odd peregrine falcon.

Your time of arrival at the Koroc River valley airstrip will dictate the distance your party will cover on the first day. Suitable campsites are found all along the river. As you start your hike and head west, keep in mind that the north side of the river is ultimately where you need to be hiking in order to access the Palmer River valley when the time comes (30 km downstream).

Gazing down the Koroc valley is very deceiving. What appears to be a smooth green “carpet” is actually undulating terrain covered in willows and shrubs – it proves to be very difficult and slow-going for hikers (see picture above). Take advantage of any areas where the firm riverbank may be used to increase your speed of travel. It is often much easier to follow the meandering river than to travel in a straight line through more difficult terrain.

The further you move downstream the more difficult it will become with respect to stream crossings, as each additional tributary flowing into the Koroc River increases its volume. Be particularly wary about stream crossings during spring runoff and just after heavy rains. Streams often move much more quickly than they appear to due to the clarity of the water. Also keep in mind that many of the streams in this area are fed by snow yearround and are extremely cold!

After traveling approximately 30 kilometres west (downstream) of the airstrip, you will want to move away from the Koroc River (north) and head over the height of land to the headwaters of the Palmer River. The UTM point 20V 435182 E 6513136 N corresponds to a suggested campsite on the border between the provinces of Quebec and Newfoundland and Labrador. At this UTM point is the beginning of the Palmer River valley. The landscape of the Palmer is characterized by majestic peaks, headwalls, steep ravines, and picturesque waterfalls.

Although the first few kilometres of travel in the Palmer River valley are relatively easy-going, the valley quickly narrows as you reach the first of several lakes that force you to hike along sloped terrain as well as through sections of thick vegetation (see picture above). It is suggested that you stay on the east side of the Palmer River for this section of the hike. Make sure to take the time to carefully plan your route by studying the terrain as it unfolds in front of you, as this could save you valuable time and possibly help you avoid an encounter with an unsuspecting bear!

Beyond the lakes, the valley widens and the terrain flattens considerably, giving hikers a chance to enjoy the views of the surrounding peaks and golden glow of the land beneath their feet.

At the point corresponding to UTM coordinates 20V 449553 E 6526775 N you will find an excellent spot to camp, with a striking view of Tallek Arm.

Section 3: The Climb into the Iberville Valley and Return to Airstrip

The next section of this challenging trek is the most difficult because of the altitude gain, the associated change in temperature and your group’s vulnerability to weather. The initial climb out of the Palmer River valley is fairly steady and takes a few hours to conquer.

Once at the top of the pass, the route crosses back into Quebec and the Parc national Kuururjuaq. At this point, you have several options to consider: 1) keep heading south towards the Koroc River valley or 2) head east to higher elevation to ultimately reach the Iberville valley, which will bring you down to the Koroc River valley.

The longer and tougher option is to head east at the point corresponding to UTM coordinates 20V 450443 E 6520970 N. You will find a notable campsite next to a small lake nearby (20V 452733 E 6521348 N). From this suggested campsite, you will climb gradually for approximately 3.5 kilometres before descending into the Iberville valley west of Mount Caubvick. All your hard work will be rewarded with some of the best views of Mount Caubvick and the glacier that bears its name. Another excellent campsite can be found in the valley below next to a small lake (20V 456603 E 6524731 N).

From this point on, the remainder of the hike is pretty straightforward. Follow the large Iberville valley in a southeasterly direction as it leads you back to the Koroc River valley and the airstrip. Stay on the east side of the stream at all times. You will travel for approximately 12 km before reaching the river, and an additional 3 km to reach the gravel airstrip.

Landing Sites for Twin Otter in the Area

The following are suggested campsites based on expected travel distances for each day, starting at the Koroc River airstrip.