The following excerpt was kindly provided by Ben Gadd, from his Handbook of the Canadian Rockies 2nd edition (Corax Press, 1995, page 58). 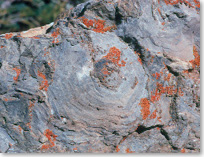 "A stromatolite is a succession of thickened, domed-up layers. They are caused by colonies of cyanobacteria, previously called "bluegreen algae." Stromatolites are found in many formations of the Canadian Rockies, and they exist in tropical regions today. Living stromatolites in Shark Bay, Australia are identical to those found in the Siyeh Formation*, 1.3 billion years old.

Consider a single bacterial colony, a mat of cyanobacterial filaments covering an area perhaps 10-20 cm across; one of many that are growing on tidal flats. When the tide is in, the mat is covered with perhaps a metre of water. The water is very clear, or the cyanobacteria will not grow.

The cyanobacteria produce a residue of calcite (lime), and the tiny calcite crystals catch among the sticky filaments. If the mudflat is gradually sinking, this trapped material allows the stromatolite to grow upward, keeping pace with the rate of subsidence. A trench dug into the mudflat shows cross-sections of domed stromatolite columns that have developed over thousands of years.

The centres of many stromatolites in the Siyeh Formation are concave downward rather than domed upward, as if they have collapsed. This may, indeed, have happened. The region lay close to the edge of the continent, where frequent earthquakes would have shaken the stromatolites, perhaps damaging them in this way."

*This rock formation is found in Waterton Lakes National Park.