As the mythological phoenix renewed itself with fire, so Waterton's prairie grasses rose from the ashes of a fire that was lit by Parks Canada staff in the spring of 2006. Why are park staff purposely lighting fires?

The answer is found in comparisons between historical and contemporary photographs. They show that, over the past 100 years, a quarter of the park's grasslands have been replaced by shrubs and trees. Prior to the 1900s, fires occurred every 5 to 10 years on the prairie. Rough fescue, the dominant prairie grass here, adapted to long dry summers and frequent fires by developing deep root systems. Fires would cycle the build up of dead and dry plant material into ash, promoting new growth of grasses and wildflowers. At the same time, they would keep shrubs and trees in check by killing or pruning them back.

These benefits were lost over many decades when fires were suppressed. Now, park staff use prescribed fires to restore prairie vegetation. Burning dead grass and branches also reduces the risk of damaging, uncontrolled wildfires which could threaten people and facilities in the park and on neighbouring ranchlands. The first prescribed fire was lit in 1989, followed by a variety of small fires, lit when conditions allowed.

Weather plays a critical role, not only in determining when to burn but also to maintain control. Years may pass before the correct combination of weather, timing and preparation occurs. For example, light wind is necessary to push the fire in the desired direction, but not so strong that it might jump fireguards, and relative humidity is constantly monitored as it determines how quickly fire spreads.

Early in the spring of 2006, as the last snow was melting, before aspen trees unfurled their leaves and native fescue grasses sent out their first green shoots; and during a lull in Waterton's legendary winds; Park Wardens finally had the necessary conditions to ignite the park's largest prescribed fire to date on 1600 hectares of prairie between the Red Rock and Entrance Parkways and Bellevue Ridge.

As with all prescribed fires, preparations began years ahead with a plan that identified priority areas to be burned, outlined the benefits and risks, and identified the necessary weather conditions, resources, safety concerns, smoke management and communications.

As park wardens waited for the right conditions to occur, advance preparations were underway. To ensure that a fire stays within its defined boundaries, fire guards are established ahead of time. Guards must be wide enough to stop and hold the fire if conditions change significantly during the main burn. In this case, the Entrance and Red Rock Parkways, the Waterton River, small ponds and lingering snowdrifts would all be used to contain the fire. The wardens created additional fireguards by lighting small fires, strategically located to create burned over areas along the downwind perimeter to hinder the advance of the main fire. These guards would also allow the wardens to steer the main fire away from infrastructure located in or near the prescribed fire site; in this case, several staff residences, a power line and the bison paddock. 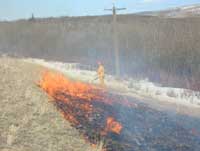 On April 3rd, the defined conditions for the fire to proceed were met and park staff swung into action. Local weather conditions at the site were checked and the forecast was suitable. The helicopter arrived. Park staff were briefed and roles clarified. The media were on hand to report on the event. Smoke was also an important consideration when planning and implementing the fire. Neighbouring communities and landowners were notified in advance, and control measures were deployed in case smoke or flames threatened traffic on nearby roads.

The first step was to widen some already established fireguards and burn new fireguards along the edges of the parkways. Fire suppression equipment and firefighters were also sent to a key point on the west side of the fire site, near the Red Rock Parkway, to put in fireguards to block the fire from burning up the Blakiston Valley. 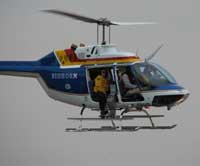 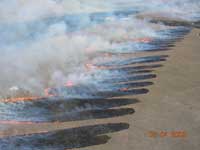 Conifer trees, fed by the dryness of their needles, rapidly flared up, while aspen groves, still full of snow, resisted the flames. Dead branches, grass and shrubs were consumed, but the majority of trees survived. 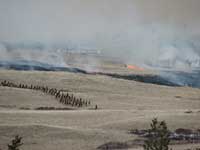 Hundreds of elk, their primal fear of fire aroused, gathered in a large group and nervously sniffed the air. Finally, a dominant cow took the lead and a long ribbon of elk quickly evacuated the area, running over the Entrance Parkway to safety on the Blakiston Fan.

The fire burned quickly and intensely, recycling the accumulation of grass into nutrient rich ash. Within a few hours it was over, burning about 1400 hectares of the planned 1600 hectare area. Heavy rains the next day helped put the fire out and were followed by warmer, sunny days.

Within weeks the black was gone, replaced by healthy green sprouts. Elk soon returned to feast on the tender grass shoots.

Aside from some dead Douglas firs and juniper bushes, scorched aspen trees, and a noticeable lack of dried grass, there was little evidence that the fire had occurred. Songbirds returned, including unusually high numbers of robins and bluebirds. Wildflowers bloomed, and small mammals resumed their foraging.

One month after the fire
© Parks Canada

Park staff will continue to light prescribed fires in coming years, under controlled conditions, to renew areas and to reduce the danger of wildfires fire escaping the boundaries of Waterton Lakes National Park.