On July 15th, 2017 a lightning ignited fire was discovered in a 300-year old spruce-fir forest in the remote Verdant Creek area of Kootenay National Park. Despite immediate and ongoing firefighting efforts, this fire grew to 18,017 hectares over the next two months.

Although fire plays an important role in park ecosystems, the safety of people, facilities and surrounding lands is always our first priority when managing wildfires. Parks Canada’s fire management practices are based on safety and decades of firefighting experience and research.

The hot and dry conditions experienced in BC during the summer of 2017 meant that forests in many regions were tinder dry. Once ignited, many wildfires throughout the province burned out of control as firefighters tried their best to contain them. The Verdant fire was no exception.

Like many wildfires during the summer of 2017, the Verdant Creek wildfire exhibited extreme fire behaviour due to hot and dry conditions.

During the summer, Kootenay National Park experienced the highest fire danger since 2003 – the park’s last big fire year. With an average maximum summer temperature of 27°C, wind speeds reaching 70 km/h, and only 26mm of rain in July and August, the weather was prime for extreme burning conditions.

As a result, when lightning struck in Verdant Creek the fire spread quickly in every direction. It burned east toward the continental divide, south into Assiniboine Provincial Park and west toward Highway 93S. 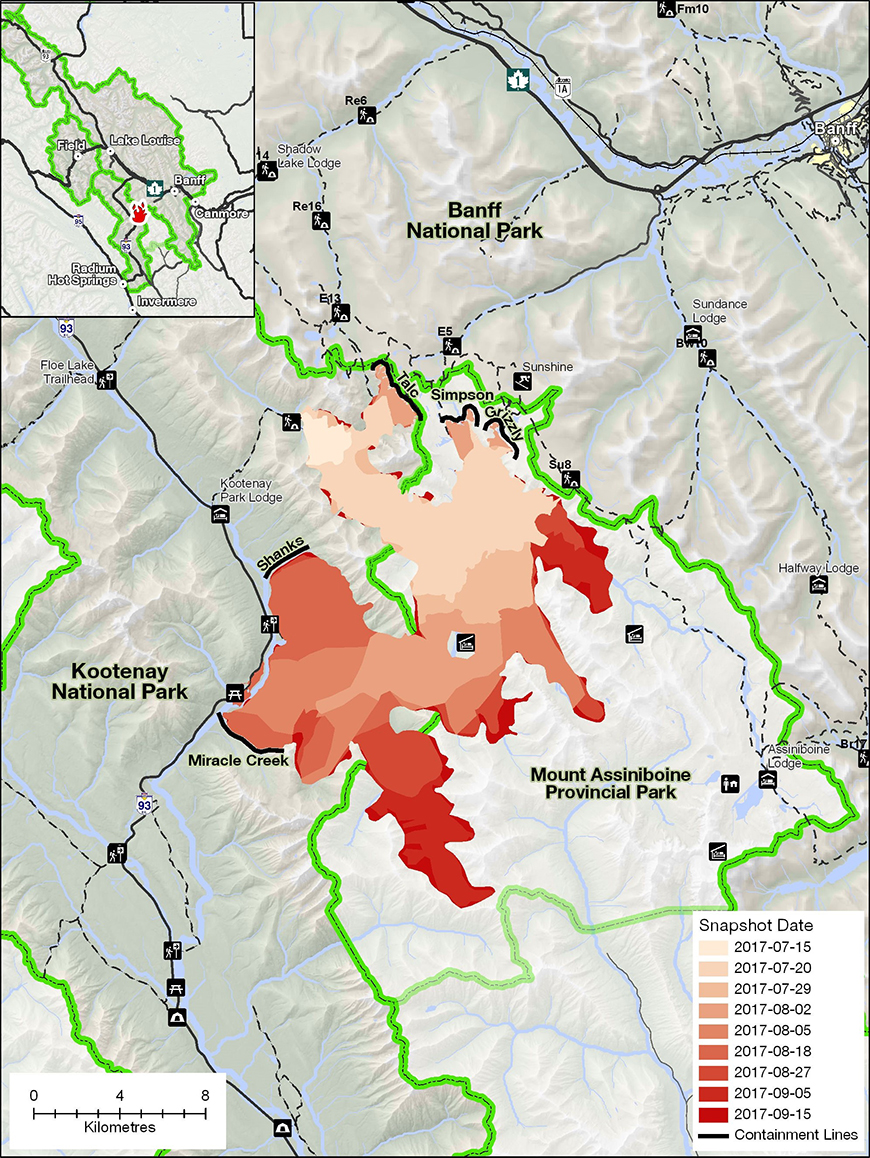 When first detected on July 15, 2017, Parks Canada immediately sent helicopters to bucket water onto the fire. At 9:00 a.m., the fire was 10 hectares – about the size of 10 football fields. By 2:00 p.m., it had grown to 10 times that size. The Verdant Creek wildfire had burned through the equivalent of 100 city blocks in just 5 hours. 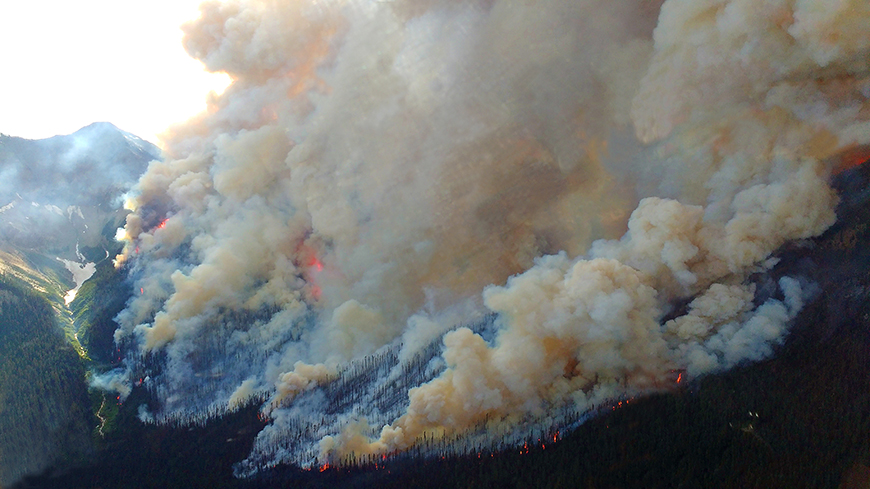 The extremely dry condition of the forests in the Verdant Creek meant that forest fuels ignited quickly and burned intensely, resulting in rapid rates of spread.

Safety is our number one priority

With the extreme fire behaviour in the first few days, it was not safe for crews to be on the ground. Instead, helicopters were sent to bucket the fire in strategic locations until conditions improved.

Park staff immediately closed trails and backcountry areas near the fire and helped hikers safely leave the area. Staff also notified smoke-sensitive residents and health care providers in surrounding communities, in case of any health risks due to smoke.

Networks of pumps, water hoses and sprinklers were also installed to protect nearby structures in the path of the fire. 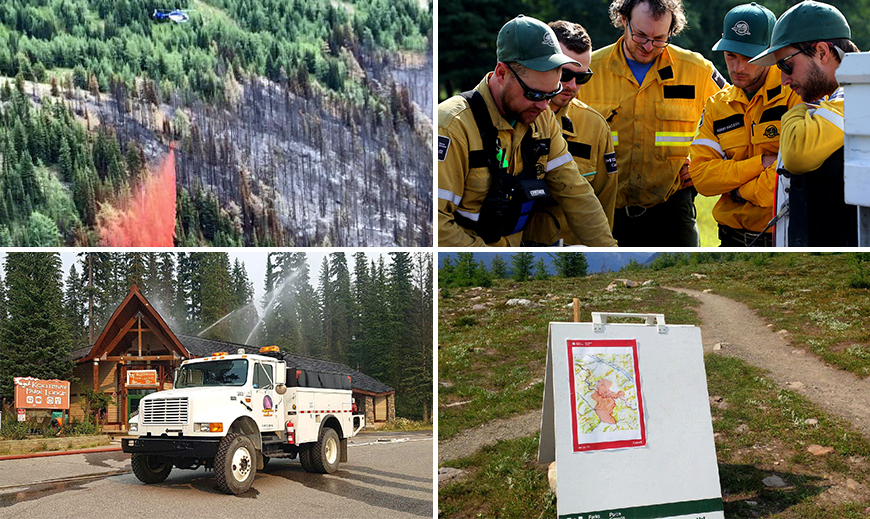 Parks Canada was able to limit the spread of the Verdant Creek wildfire in priority areas by using tactics such as helicopter bucketing, while crews installed facility protection on nearby structures and implemented backcountry closures.

Every effort was made

Parks Canada fire management specialists quickly realized that more help was needed. They called in additional personnel to support their efforts and ensure the safety of the public, our crews, park infrastructure and neighbouring lands.

Resources from across Canada arrived to help. These resources included fire crews, equipment, and fire management staff from Parks Canada and three different provincial agencies. At the height of the operation over 140 people were working on the Verdant Creek wildfire and as many as 10 helicopters.

Every effort was made to control the Verdant Creek wildfire and reduce any impacts on visitors, businesses and local communities. Despite efforts to extinguish the fire, the weather remained hot and dry and the fire continued to grow. 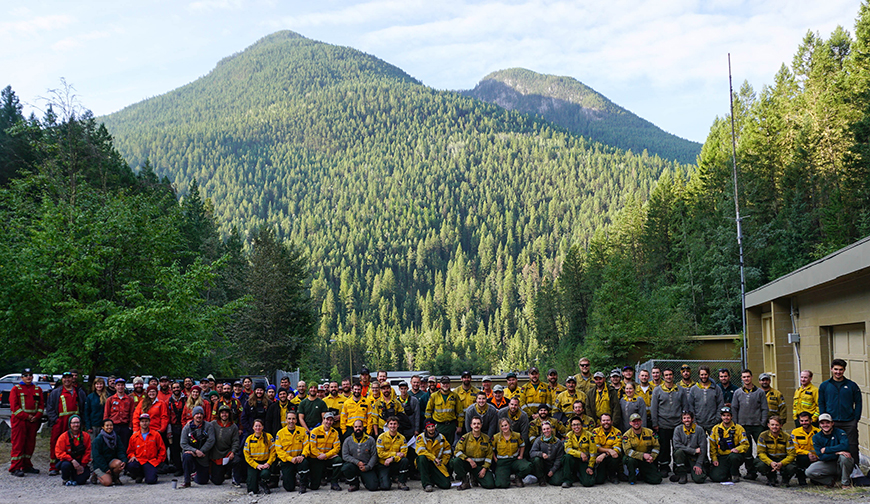 At the height of the operation over 140 people and up to 10 helicopters were working on the Verdant Creek wildfire. 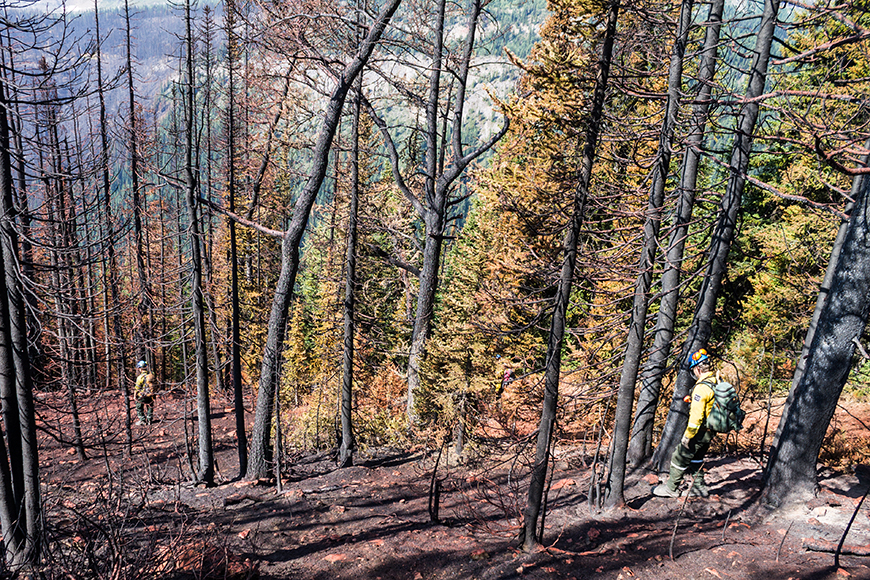 Fire crews worked hard in steep terrain to build containment lines to stop the fire from spreading at strategic locations. 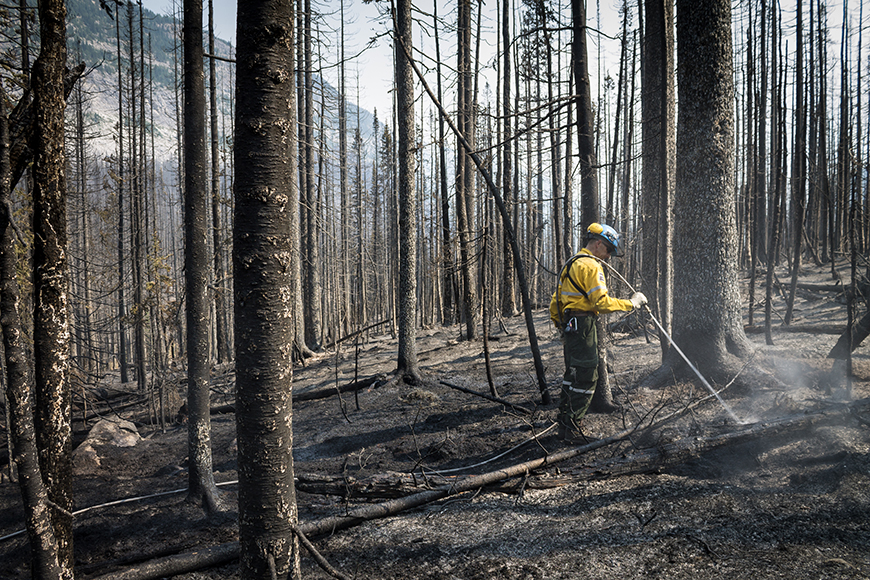 Crews extinguished both hot spots within the fire and new spot fires that started outside the fire perimeter from flying sparks and embers. 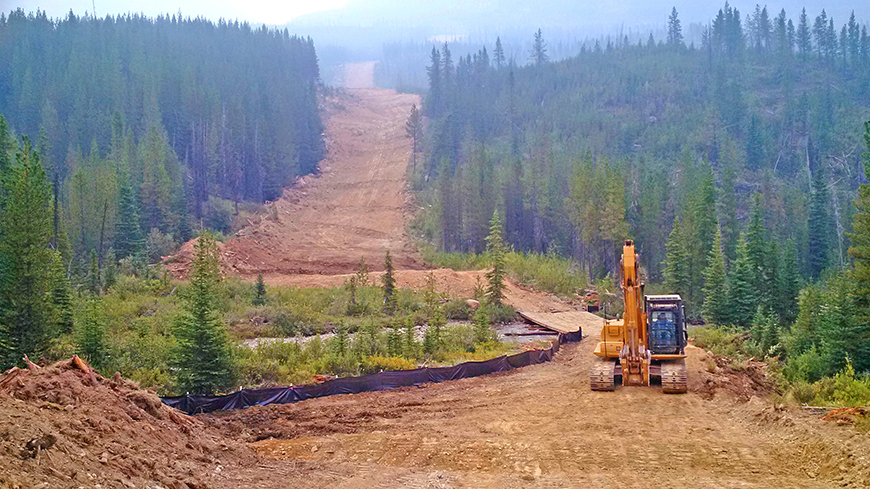 As a contingency, heavy machinery cleared trees and shrubs to re-establish a fireguard in Vermillion Pass. In 2003 this containment line helped prevent the Tokumm–Verendrye wildfire from spreading into the busy Bow Valley of Banff National Park. 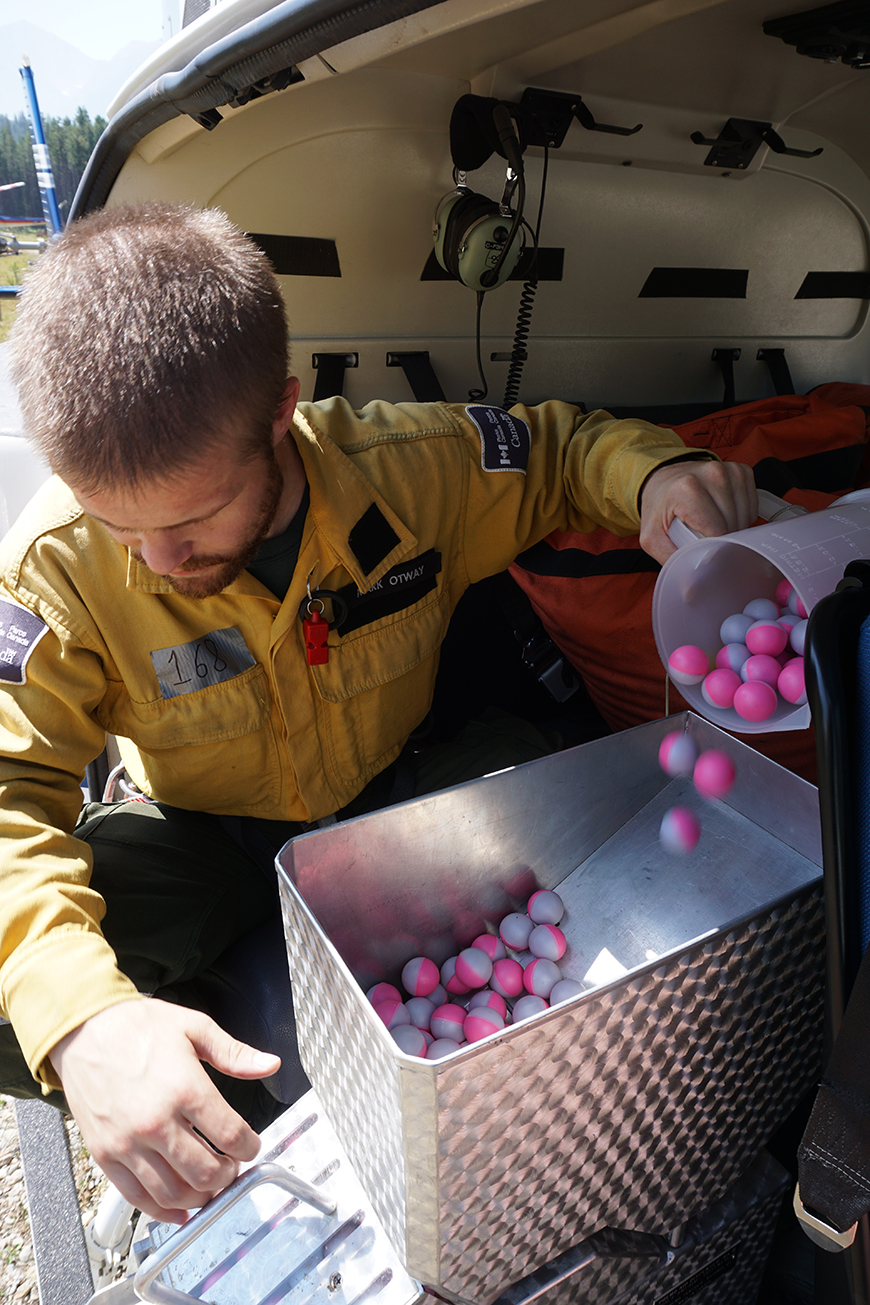 Fire crews used aerial ignition devices to light “back burns” that removed fuel in front of the fire. The colourful balls contain a chemical that ignites when combined with glycol which is injected into the balls as they fall from the helicopter. This system allows fire managers to safely light fires in steep terrain. 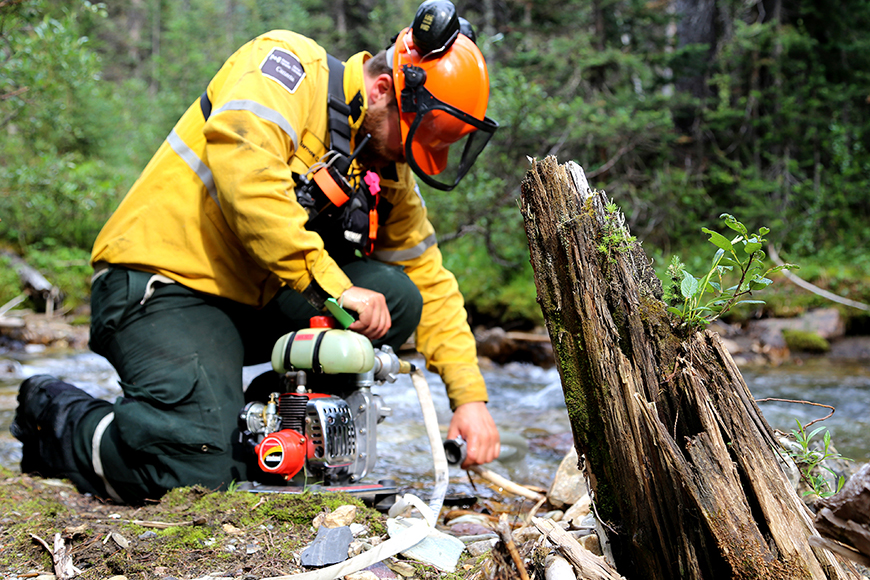 Parks Canada highways staff kept traffic moving and managed temporary road closures on Highway 93S when motorist safety was at risk. These temporary closures were intermittently necessary during a six day period in early august when heavy smoke blanketed the area and the fire was burning close to the highway.

Verdant wasn’t our only fire

Throughout the summer, Parks Canada initial attack crews remained ready to respond to new wildfires. Their quick action ensured that 40 additional lightning- and human-caused wildfires in Banff, Kootenay and Yoho national parks were put out.

The public support for Parks Canada fire fighting efforts was overwhelming and greatly appreciated by the crews.

For thousands of years, fire has been an integral part of Canada’s landscape. Here in the Rocky Mountains, it has played a significant and important role in shaping the types of plant and animal species we have in the park. 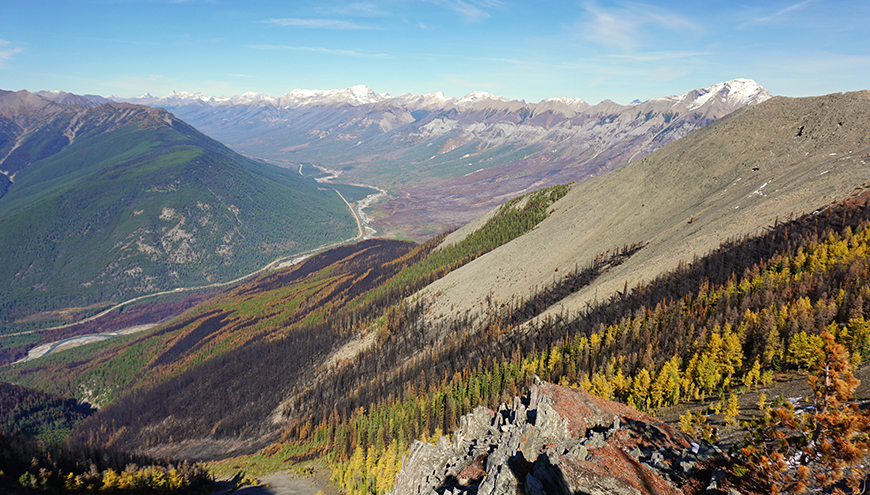 Over time, fires create a patchwork of burned and unburned vegetation. This diverse mix of habitats supports a wider range of wildlife species and keeps ecosystems healthy.

Fire recycles nutrients stored in live and dead vegetation by converting it into mineral-rich ash. After a fire, lodgepole pine cones opened by the fire’s heat, release their seeds. In the spring, new growth will sprout from the roots of burned shrubs. Flowers will bloom and grasses grow. Animals will once again forage in the lush new growth. 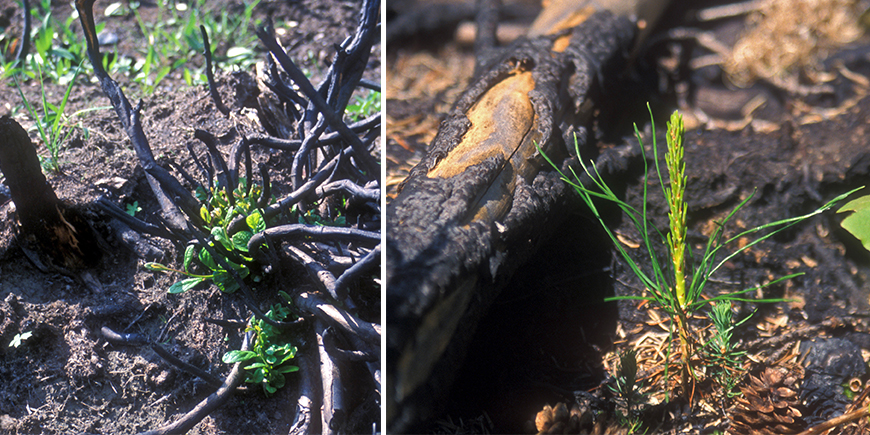 After a fire, new growth emerges from shrubs and trees sprout up.

An opportunity to help a special tree

The Verdant Creek wildfire offers an opportunity to help restore an endangered tree that naturally relies on fire. Whitebark pine (Pinus albicaulis) is a keystone species of high elevation ecosystems in western North America. Listed as endangered on the Species at Risk Act (SARA), this species is in serious decline over much of its range due to a number of different factors including reduced wildfire. 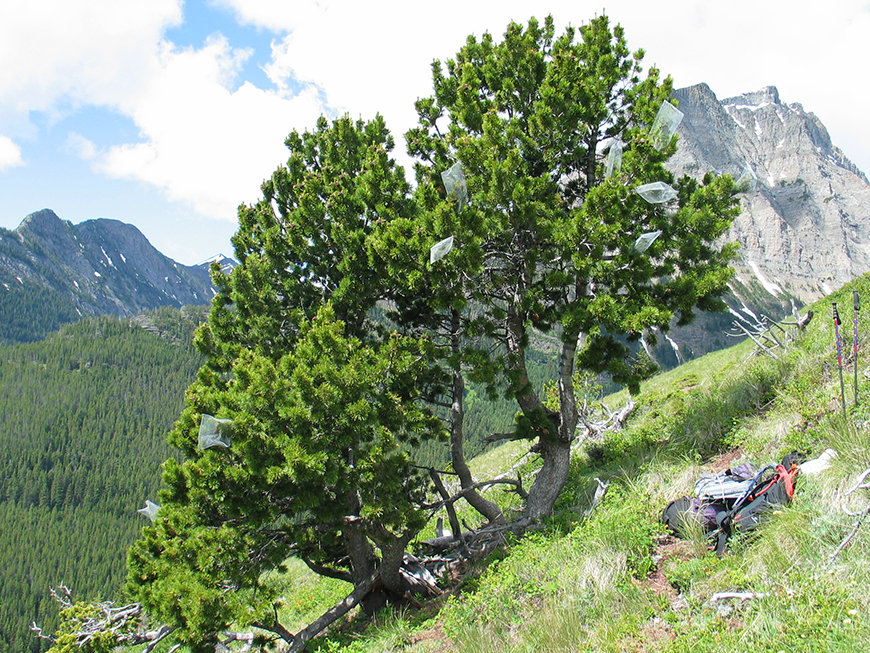 Whitebark pines are one of the first trees to establish after a fire. As the forest regenerates, other trees may eventually shade out this sun-loving species, so natural disturbances can reset the successional clock to favour whitebark pine. Fires create openings in the forest canopy and nutrient-rich seed beds. These conditions give whitebark pines a competitive edge over other cone-bearing trees in the subalpine.

Historically, subalpine forests burned every 90 to 300 years. Most fires were low intensity, small and patchy. They created open spaces suitable for whitebark pine. Former fire suppression practices reduced the number of these important open spaces, hindering growth of new whitebark pines, and allowed older, even-aged lodgepole pine stands to prevail at lower elevations. In the absence of fire, these lodgepole pine stands are prone to epidemics of mountain pine beetle. As the pine beetle epidemic intensified due to human influences, it spread into the higher elevation whitebark pine stands.

For many years, Parks Canada vegetation specialists have been surveying and mapping these trees and their habitat, collecting cones for seed recovery and working with nurseries to germinate trees for future planting. The Verdant Creek wildfire created an opportunity to give these trees a fighting chance by providing exceptional habitat for planting. Just days after the Verdant Creek wildfire, Parks Canada staff and contractors began planting whitebark pine in burned areas. These trees will be monitored over time and, if the right conditions persist, will grow into healthy, productive cone-bearing trees that will help re-establish the endangered population.

To find out more about whitebark pine visit this page. 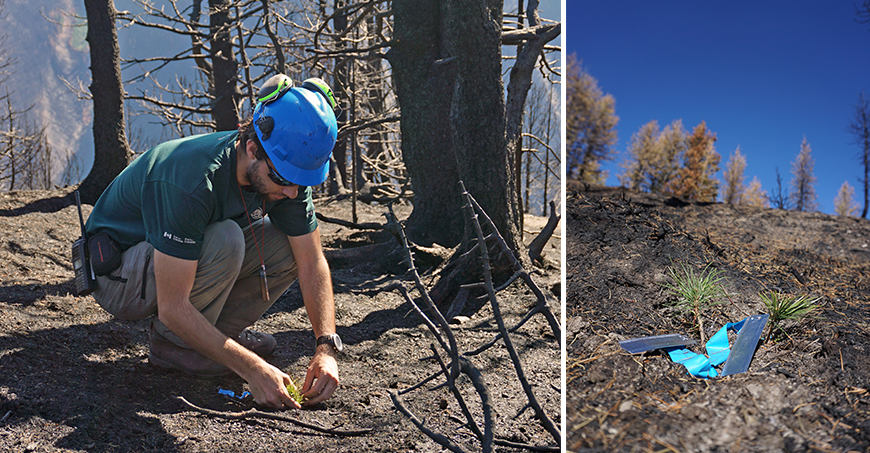 Parks Canada uses a number of different techniques to reduce the risk of wildfire to communities and facilities, including fuel management and prescribed fire.

FireSmart manual forest fuel reduction projects remove forest fuels through pruning and thinning next to buildings and other facilities.

Highly controlled prescribed fires reduce the danger of wildfire to the public, infrastructure and neighbouring lands as well as release nutrients and allow for a mosaic of ecosystems that support diverse plants and wildlife.

For more information on FireSmart initiatives and prescribed fire visit this page. 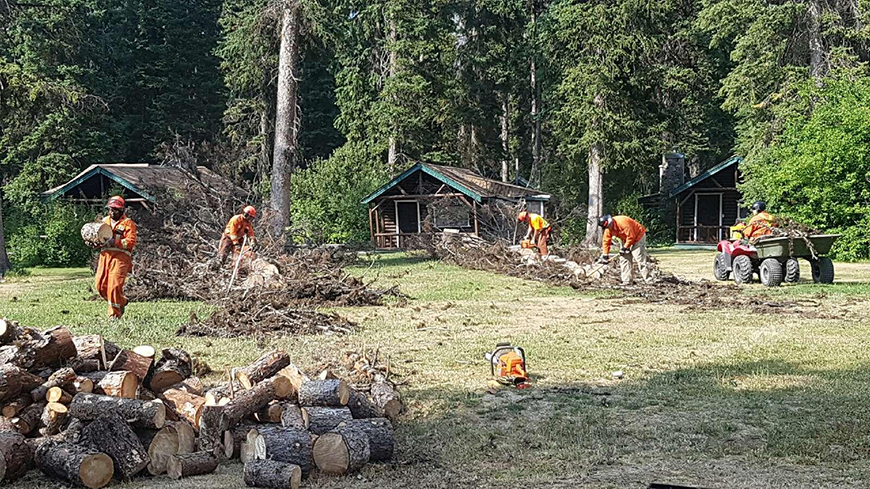 Crews remove trees and shrubs around facilities to reduce risk from wildfires.

Some area closures associated with the Verdant Creek wildfire will remain in effect in Kootenay and Banff national parks until trails, signs and bridges can be fully assessed and rebuilt. Visitors are encouraged to check for the most current list of closures, here.