Living beside the Great Lakes shipping channel, have you ever heard the signature ‘one long, two short’ series of sounding blasts that signify the informal salute of two ships passing on the water? While aboard the Canadian Coast Guard Ship Constable Carrière in May 2015, a small handful of Parks Canada employees learned of the ‘Lake Superior Hello’ first hand when the ship’s captain, Commanding Officer Mike Hines, stopped mid-sentence to sound the whistle and wave to the U.S. Coast Guard vessel heading towards the American locks as we made for the open waters of Whitefish Bay. 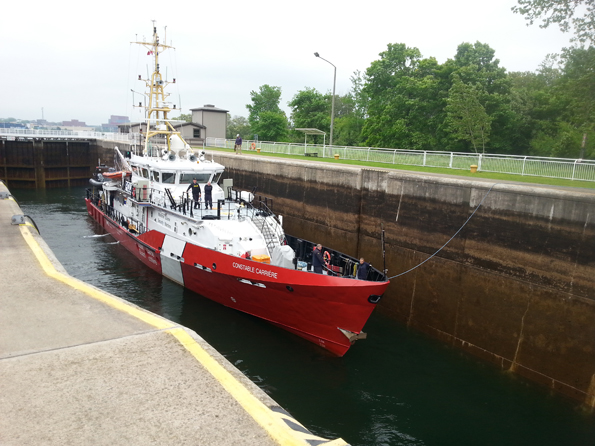 We had been invited aboard the Constable Carrière to join their day’s journey to see the ice still congesting the bay which opens onto the big lake. The crew’s goal was to confirm radar reports on the status of the ice and to judge whether this area of water would be navigable, should it need to be crossed in response to a search and rescue call. The chiming of crystalized ice shifting in the wake of the boat and the ping of the occasional small ice float chiming off the bow was musical and mesmerizing. Was it the cold air blowing in off the still ice-locked centre of Superior or the view that took our breath away? It’s hard to tell, but what is certain is that the pervasive mood among the Parks Canada team was pride in this gorgeous natural wonder our Agency helps to promote and protect, and our incredible good fortune to have this count among our work. 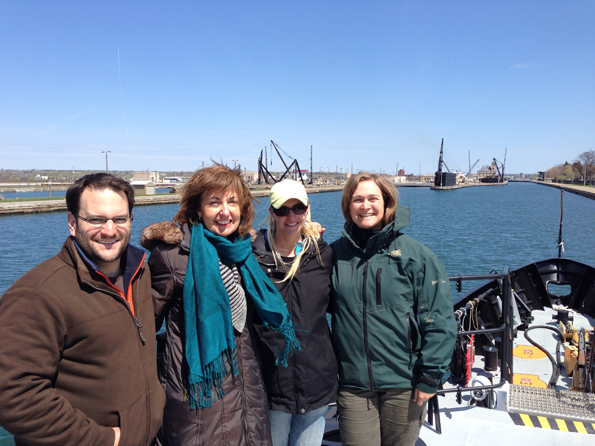 Suppressing our urge to sing the “Gilligan’s Island” theme song for the entire 3+ hour tour, the ship’s crew were friendly and engaging, granting us an informative walk-through of the ship, a delicious lunch, and most importantly, a rare glimpse into ‘a day in the life’ of the many talented, highly trained individuals who make up their Canadian Coast Guard and RCMP crew. Tasked to patrol the Great Lakes and the St. Lawrence Seaway, the Constable Carrière is among a fleet of Canadian Coast Guard vessels dedicated to enhancing national security—a responsibility which rests in very capable hands. 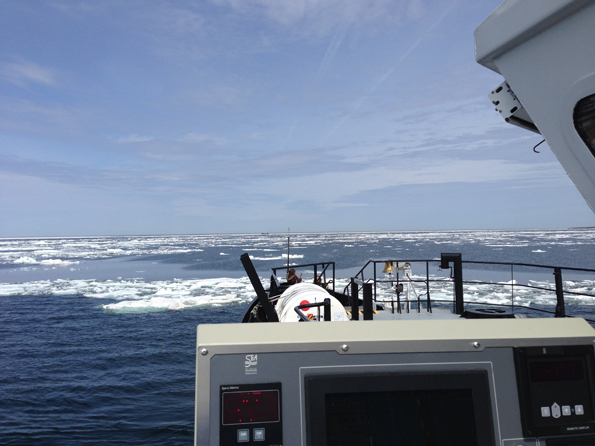 If you’ve strolled the boardwalk along the St. Mary’s River in Sault Ste. Marie, or spent some time visiting the Canadian lock at Sault Ste. Marie Canal National Historic Site, you likely will have noticed our distinguished visitor, CCGS Constable Carrière. The ship makes routine stops at our site to replenish provisions, conduct crew changes and to take care of upkeep, and we’ve been very proud of our neighbour’s presence here. With winter now here, bringing with it ice, the ship and crew have moved on to winter refit projects and pre-season training. We wish them well over Parks Canada’s off season, and look forward to their return in the spring.