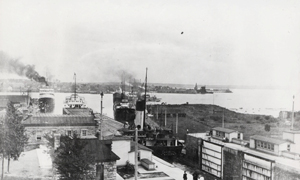 By Mark Saari and Jeanette Cowen

This year marks the 100th anniversary of the City of Sault Ste. Marie. The lock, built in 1895, is an enduring part of its heritage. Now, operated by city staff and part of a national historic site managed by Parks Canada, the lock has a fascinating history of which many members of the community are largely unaware.

The early 20th Century was a busy time not only for the City of Sault Ste. Marie, but for the Sault Ste. Marie Canal as well. The Emergency Swing Dam had proven its worth during the accident of 1909, providing the necessary assistance to repair the lock and have it operational again in just 12 days. In addition, a post office had opened in the Administration Building allowing sailors passing through to send and receive mail. By 1912, the Canal had also begun an extensive beautification project, the results of which can still be enjoyed by visitors today.

The role of the Canal in Sault Ste. Marie in the early 1900s had both economic and social dimensions. Superintendent at the time, J.W. LeBreton Ross, promoted community involvement, acting as president of the local historical and horticultural societies. He was a frequent speaker at public occasions, and an established authority on the history of the area. His residence, the beautiful red sandstone house with the decorative veranda, was considered the social hub of Sault Ste. Marie. 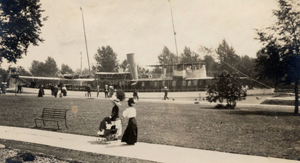 The Sault Ste. Marie Canal was instrumental in establishing the city as a continental corridor for transportation, serving as the final link in an all Canadian waterway—stretching more than 3500 kilometres in length. Many of the labourers who arrived from afar to assist in the construction of the lock remained in the city to form the basis of a growing population. Today, locals and visitors can still view boats passing through the small recreational lock, built within the original lock chamber in 1998. Picnics may be enjoyed surrounded by century-old trees and historic buildings. The Sault Ste. Marie Canal was, and remains, an integral component of our city’s 100-year history.