The Treasury Board Policy on Management of Real Property states that the departments must:

With respect to arranging for appropriate alternative uses for surplus federal heritage buildings, the Guide to the Management of Real Property2 states that "best efforts" means, at a minimum: 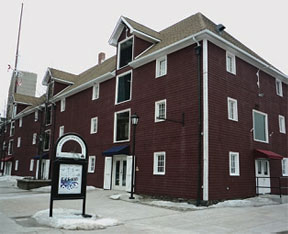 Old Red Store Lower Water Street, Halifax, Nova Scotia
© C. Lefebvre, 2009
The Old Red Store, built circa 1830, was designated Classified and disposed of in 1981. It is part of the "Historic Properties" waterfront complex which was slated for demolition in the early 1960s, but were eventually spared and rehabilitated, thanks to innovative financing and co-operation among municipal and federal bodies and private developers. The Historic Properties development was one of the first large-scale Canadian development schemes to use "restored" heritage buildings as the corner-stone for the commercial revitalization of a blighted waterfront area, and demonstrated the viability of heritage conservation as a strategy for urban revitalization in Canada.

Steps in the process

The role of FHBRO in the disposal process is to provide support to custodian departments, by advising them on potential alternative uses for surplus federal heritage buildings, appropriate levels of protection (if buildings leave the federal inventory) and the nature and level of heritage recording required. FHBRO may also help custodian departments draft heritage clauses to be used in sales agreements.

It is recommended that custodian departments contact FHBRO as soon as a disposal process is initiated, or as soon as a building has been identified as surplus to departmental requirements. In this way, the department will have sufficient opportunity to explore all avenues recommended by FHBRO. This step also ensures that departments have the core documents that describe the heritage character of the building in question, and understands the policy requirements and FHBRO's procedures.

Custodian department may need to consult FHBRO several times as their disposal strategy evolves, whether to obtain advice on alternative uses or to discuss possible options with respect to the nature and level of protection being considered.

It is important that all plans to dispose of federal heritage buildings, whether "routine" or "strategic", be discussed with FHBRO.

2 Preparation of a disposal report

The purpose of a disposal report is to demonstrate to FHBRO that the policy requirements have been met.

When a custodian department has identified an acceptable alternative use and an organization or entity that is interested in acquiring the surplus building, it must submit a detailed report to FHBRO that describes the following:

FHBRO reviews departmental reports and confirms in writing whether the department has made "best efforts" and therefore met the requirements of the policy. 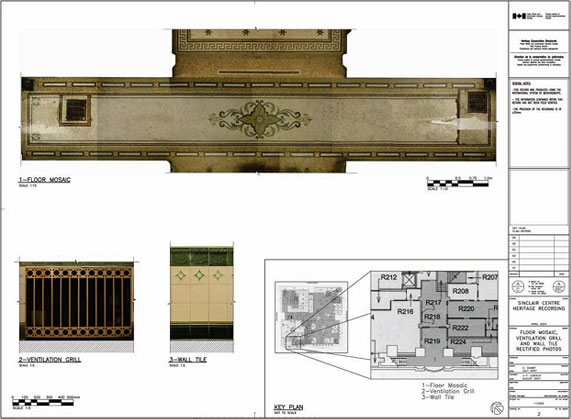 In cases where a department wishes to propose the demolition of a federal heritage building, it should consult FHBRO as early as possible to ensure that all reasonable options to preserve the building have been considered. Although demolition is an option that FHBRO would never recommend, it recognizes that there may be special circumstances in which a department is left with no other choice.

Once an analysis of options has been completed, the department must submit a report to FHBRO, which demonstrates that all options to preserve the building were explored and that the only viable option is demolition of the building. This report must include a summary of the options and alternatives that were considered, along with a detailed justification of the final decision to demolish the building, and demonstrate:

FHBRO reviews these reports and confirms in writing whether the department has made "best efforts" in accordance with the policy.

Once the disposal has been completed and the building has left the federal inventory or has been transferred to another department, the former custodian department must inform FHBRO so that its database and the Register of Government of Canada Heritage Buildings can be updated.

Departments are advised to consult Parks Canada when selling a property containing a national historic site, or part thereof, and prepare a heritage recording of the property if it leaves the federal inventory. They should also notify Parks Canada at the end of the disposal process.4 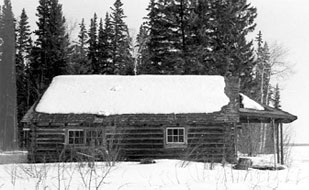 Jackfish Warden Patrol Cabin Wood Buffalo National Park, Northwest Territories
© B. Hartop, 1989
The Jackfish Warden Patrol Cabin, built in 1929, is a Recognized federal heritage building. The cabin is associated with the federal government's commitment to protect endangered wildlife by expanding its national parks system. Wood Buffalo National Park, established in 1922, is the largest game sanctuary in Canada and one of the largest in the world. The cabin is the only remaining one of 26 that were erected in the park by wardens between 1922 and 1934 and is typical of the larger year-round residential cabins of the time.